With Pr. Commissioner Sh. S.K. Das, I had some best of times working in Zone I for Enclave Projects. Only few of the experiences follow here.

1.  Unexpectedly I managed to get issued invitation from CS, Mantralaya

Message from Das sir in the evening of the day when I along with my officer Shailesh managed to fix an appointment with Chief Secretary, Govt. of Maharashtra. 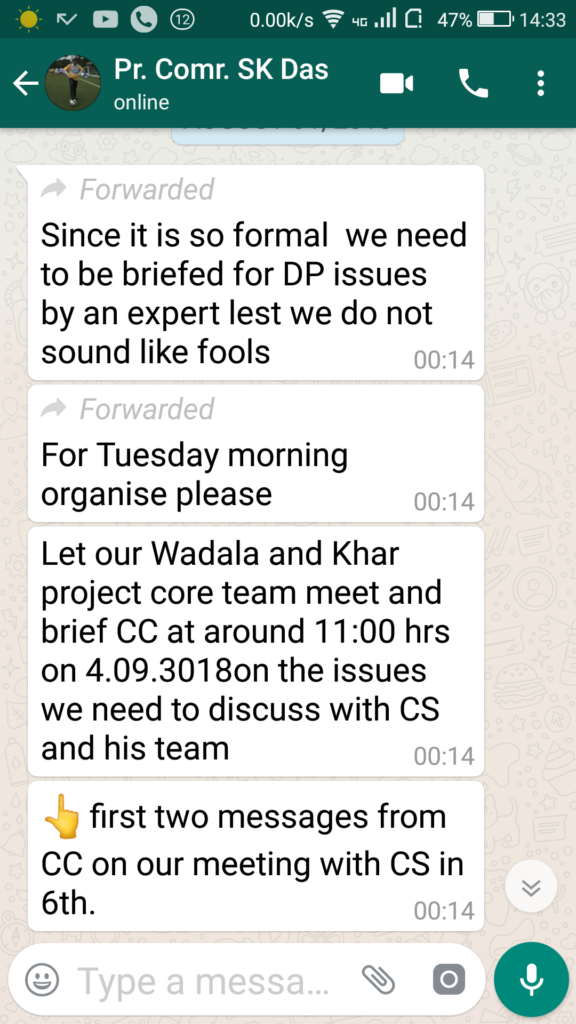 2. When I posted the Content made by me for Meeting with CS

The formal invitation from the office of Chief Secretary, Govt. of Maharashtra for meeting to discuss the concerns for Wadala Enclave project was some happy moments clubbed with certain nervousness. The reason was that meeting was a formal one and the entire team including MUD, MCGM, Town Planning from the side of CS was supposed to be part of the meeting. So, the Chief and PC sir both wanted to be conversant enough with the issues before entering into a discussion sort of meeting.

I went on taking special efforts on weekend and made an elaborate content on what were the issues making the project unviable and as to how these could be addressed with the help of State. I posted the customized content on one of my websites viz. https://preventiveofficer.com and sent the link to Das sir. The screenshot below is the real time response of Das sir. 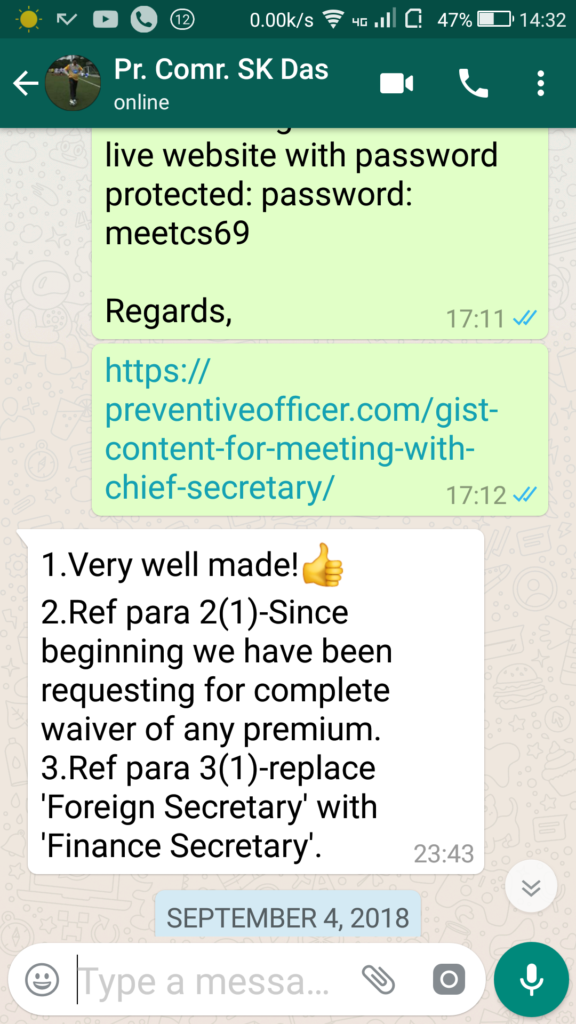 3. When The DCPR was Finalized & News Broke in Paper ( Weekend)

It was Sunday 23rd, September 2018 when I got this news clip on my whatsApp. A day ago on 22nd the Government of Maharashtra had approved it new City plan for Mumbai and stake holders were were supposed to be either benefited or disadvantaged.

Our Wadala project too, had many things to comply with the new provisions and we were required to assess overall effect on the viability of the project.

Authorities were already concerned with the discriminatory provisions for the Central govt projects introduced in the draft DCPR-2034 and the department was pursuing with the state since long for certain relaxations. So, once the DCPR was finalized, calls had to be taken by the authorities over the actual implication. 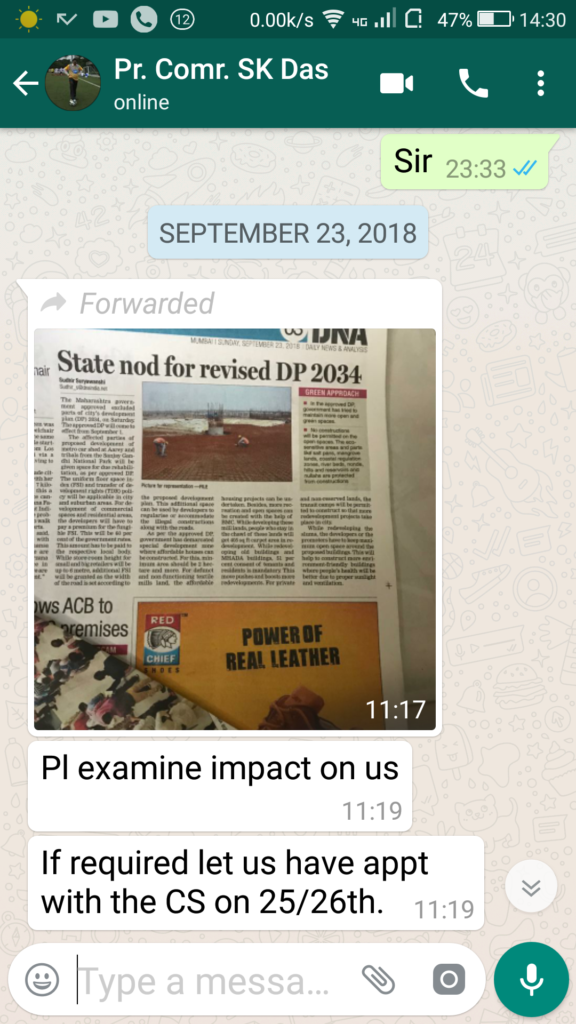 4.   I Posted Anlaysis of the Impact

Once I posted my analysis of the implications authorities seemed worried and sought to take efforts for meeting with CS. My submission was that any update on meeting with CS could be updated he following day, the very first working day of Mantralaya. 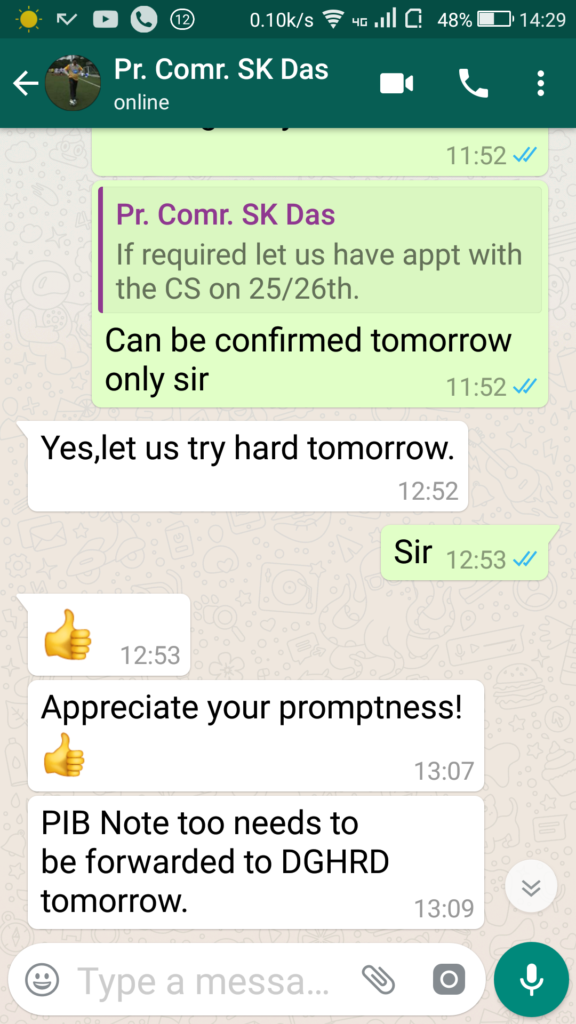 5. A Formal Letter was Necessitated for Meeeting with CS

The enclave team including myself, Shailesh and Gaurav was pursuing with Mantralay for an appointment with CS so that issues could be resolved and the project could be taken  forward.

Despite our umpteen efforts the meeting could not be fixed. So the authorities sought to write a formal letter to CS. I had made a draft letter and posted the same to Das Sir.

But he was of the opinion that the letter should have been extremely brief, so he instead wrote a format and asked me to check, if that could do the Job. 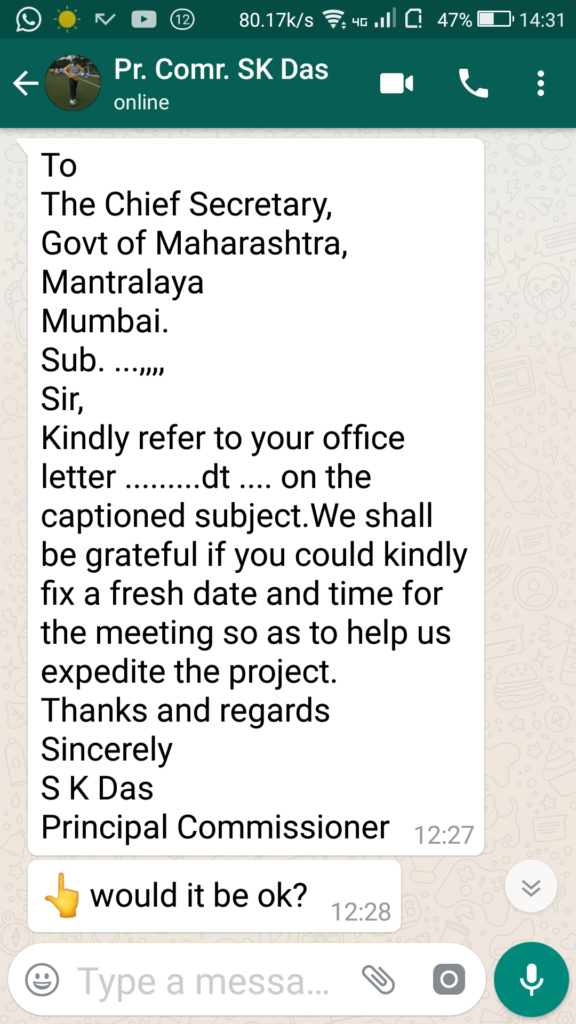 This site uses Akismet to reduce spam. Learn how your comment data is processed.

Impossible to I am Possible !